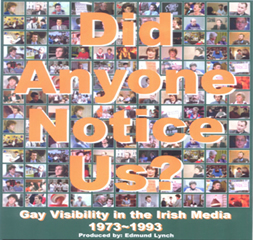 Wicklow County Council’s Social Inclusion Unit are delighted to present a showing of Edmund Lynch’s ‘Did Anyone Notice Us?’ Gay Visibility in the Irish Media 1973 to 1993 as part of Social Inclusion week which takes place from 17th to 23rd October 2010. The screening is taking place in Signal Arts Centre on Thursday 21st October at 7pm. The film will be introduced by the filmmaker, Edmund Lynch. On 15th February 1974, Radio Éireann broadcast the voices of two openly gay people speaking. This was the beginning of visibility for Irish lesbians and gay men in the Irish media.

This documentary looks at 20 years of archival records of individual courage and campaigning from 1973 to 1993, culminating in the passing of the law decriminalising sex between men. It includes the Fairview Park protest against the queerbashing and murder of Declan Flynn (1983); the first interview with David Norris (1975), various clips from the Late Late Show (1980-1989) and The Diceman (Thom McGinty, 1987-1993) amongst others. Audience Award Winner, Dublin Lesbian & Gay Film Festival 2003. This documentary was made with the active co-operation of the RTÉ Television and Radio Archives, the Irish Queer Archives and private collections in the lesbian and gay community across Ireland.