Signal Arts Centre will be running it's annual Christmas Fair featuring local arts and crafts. It will be running daily between 10am and 5pm from the 5th to the 24th of December.

Staff Artists come together again this year for their annual group exhibition which is a celebration of our work. This year’s event promises to be an exciting and varied show, with a wide-ranging display of artistic practices.

Some photos from Culture Night, that took place here in Signal Arts Centre on Friday 21st September. A big thanks to everyone who came out to celebrate and take part… 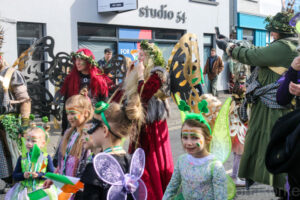 After two years of waiting, St. Patrick’s Day festival and parade are back. The cancelling of the festival two years back was the first time to really understand how serious… 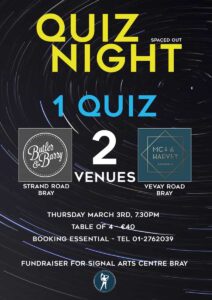 We're back with another fundraiser quiz night, this time in two venues at the same time! Butler & Barry on the Strand Rd. in Bray and MC's and Harvey on…

Signal Arts Centre will be running it's annual Christmas Fair featuring local arts and crafts. It will be running daily between 10am and 5pm from the 6th to the 24th of December. 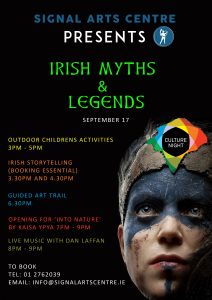 Culture Night 2021 was a great success, it was great to be back with everyone and thanks to all the staff at Signal for putting together so many great events.…

Wicklow County Council's Social Inclusion Unit are delighted to present a showing of Edmund Lynch's 'Did Anyone Notice Us?' Gay Visibility in the Irish Media 1973 to 1993 as part of Social Inclusion week which takes place from 17th to 23rd October 2010. The screening is taking place in Signal Arts Centre on Thursday 21st October at 7pm. The film will be introduced by the filmmaker, Edmund Lynch. On 15th February 1974, Radio Éireann broadcast the voices of two openly gay people speaking.

As you know Signal is on the road to fulfilling her long held ambitions and dreams. Part of that dream has been to buy and re-develop the site on which the Centre is currently housed. We began our fundraising efforts in earnest this year and have been helped by both Bray Town Council and Wicklow County Council. The staff of Signal has also been working tirelessly to raise extra income by organising film nights, table quizzes, and raffles.

For more information: Craft Images If you would like to order a personalised embroidery piece or personlised caricatures drawn by Greg Murray please contact our office. Phone: 01 276 2039 or Email: info@signalartscentre.ie