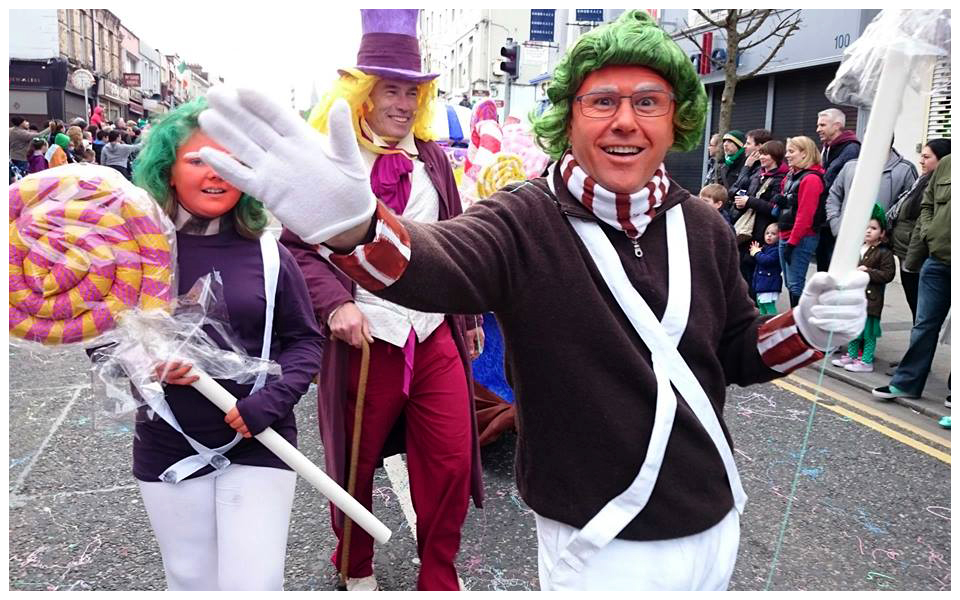 It seems when Signal Arts Centre gets involved with major events in Bray, people really appreciate the gigantic effort the Signal artists and friends put in. And boy what a shift these creative enthusiasts put in. The theme this year was Willy Wonka. Greg Murray like last year was ably supported by Nick Nicolaou in the creation of the Wonka Factory Boat. This was, in fact, a rickshaw, but when the transformation was finished it truly took on the appearance of a boat. A fantastic effort from both men as the rickshaw was in poor condition.

Andrea Paul and Aoife Patterson worked on the Wonka factory which was a scaled down version that was dressed around a shopping trolley; again a lot of hours went in here and a brilliant team effort by the girls. Nigel Holahan and Brian Smith worked on the Mike TV/Wonka Video Recorder. This really was one of the most unusual pieces in the parade and they even had a standoff with an RTE Camera man! Andrea Paul worked on a violet bubble costume and really got into the part as Violet Beauregarde. Dave Flynn and Greg Murray had a shootout as to who was the best Willy Wonka, all agreed it was a gentlemanly draw! Jim Morrison lent a hand pushing the boat which was no mean feat either and biceps and calves were tired and sore by the end of the day!

After all that though, this was only half the story as many more contributed immensely including Claire Flood who did a lot of organising and literally acted like a caterer on the big day. Gill Cassidy worked tirelessly on Lollipops and everyone above helped with makeup, touch ups, signs and all sorts of accessories. This is Signal Arts Centre, everyone gets stuck in, and the community gets involved. The budget is not huge for these events but we are rich in people participation who wants to promote the Centre. The feedback from the crowd makes this mammoth effort all worthwhile and all the chocolate in the world can’t make that taste any sweeter!