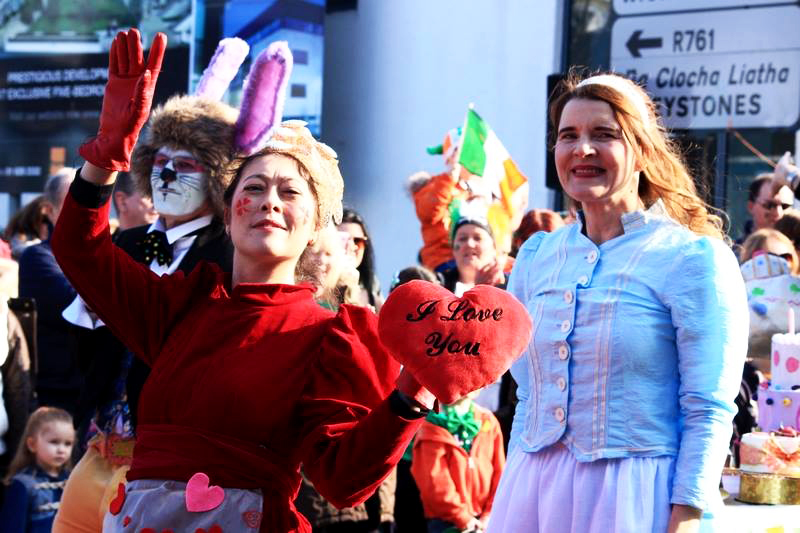 An appropriately coloured purple truck supplied by Greenstar arrived at 10.00am sharp; at that stage the staff artists were already working hard at assembling all the artwork that had been created for the float over the previous weeks. As the gallery space piled higher and higher with extravagant flowers, colourful foam cakes and pastries, pink papier mache flamingos, gigantic mushrooms and wonderfully oversized cards and quotes to decorate the float for the parade, the excitement and anticipation grew. Over the following few hours the float began to take shape.

Piece by piece the artwork was carefully arranged, tweaked and hoisted into place and Signal Arts Centres interpretation of the magical story of ‘Alice in Wonderland’ began to unfold. More and more people started to arrive to assemble their costumes, have their faces painted and do some last minute finishing touches to their handmade costumes. The workroom at Signal was filled with people in a frenzy of productivity to ensure their costumes were finished and ready for the parade. Once they were ready the assortment of characters to include Tweedle Dum and Tweedle Dee, the White Rabbit, the Queen of Hearts, the March Hare, the impressive Queens Armed Guard, the Bumble Bee, the Duchess with the crying baby, the Cheshire Cat, Absolem the Caterpillar, Alice of course, and the Mad Hatter to name but a few of the many fantastic costumes and characters that were represented on the day.

The rabble departed Signal with their props and assembled on the Vevay Rd to take their place in the line for the parade. Once the parade started, our entry was complete when the float and the characters merged for their long walk down through Bray to the seafront. As they walked they entertained and excited the crowd with their jokes and antics surrounding the theme of the Mad Hatters tea party all the time, while Absolem the caterpillar cheered and waved to the crowd from the giant mushroom on the float. The Mad Hatters tea party escalated to a truly hysterical affair at the judging panel as the tea party took full flight with Tweedle Dum and Tweedle Dee running amok, the grinning Cheshire Cat and the Queen of Hearts dancing a merry dance and the March Hare leading ring-a-ring-arosie. Our performance evidently impressed the judges as we scooped the Arts and Entertainment Award much to our delight. We would like to thank all of the Signal staff for all their hard work and commitment, and to all our enthuaisastic volunteers who joined us on the day